Deo Optima Maximo is often abbreviated as D.O.M., and when a young Brazilian chef by the name of Alex Atala lived in Corso Garibaldi, during the early 1990s in Milan. He lived opposite the church of S. Maria Coronata which had an engraving one of it’s walls, the inscription read ‘D.O.M.’ Now, being an inquisitive and interesting, sensitive fellow and having seen these initials so often, Atala went to talk to the priest one day. He asked him what was the meaning of these letters, and in his own words (Atala’s) ”he told me a story that blew my mind”. Deo Optimo Maximo is a benedictine expression. In the middle ages the monasteries of that order would welcome travelers and serve them delicacies that would eventually turn into classics, like the benedictine biscuits, eggs benedict and benedictine liqueur. The initials and the story stayed with him. And when years later, back home in Sao Paolo (Brazil), he opened what is his now famous eatery, and he just had to use the initials for the restaurant`s name.

Now what on earth does any of this have to do with me, you may be asking?

Well, last week, and for almost inexplicable reasons, I found myself at the front door, around dinner time, 21hs on a friday evening. The table was set, and myself with two chums began one of the most extraordinary and delightful evenings of my gastronomic life, to date. The menu we, correctly, chose was called ‘Maximus’ and we began the 17 courses, each plate accompanied with a small glass of what the DOM wine dept. thought would go well with. And by goodness it did all that, and more. We also had some back-up wine, just in case as we really did not know what we were getting ourselves into here. (In the bag was a sensible bottle of 2007 Clos St.Hune, and bottle of slightly burnt (thanks to a Yankee wine importer’s strip label) H-La-C 1998 from PJA. And finally a great bottle of 1986 Ch.d’Yquem, totally delish!) and off we went. 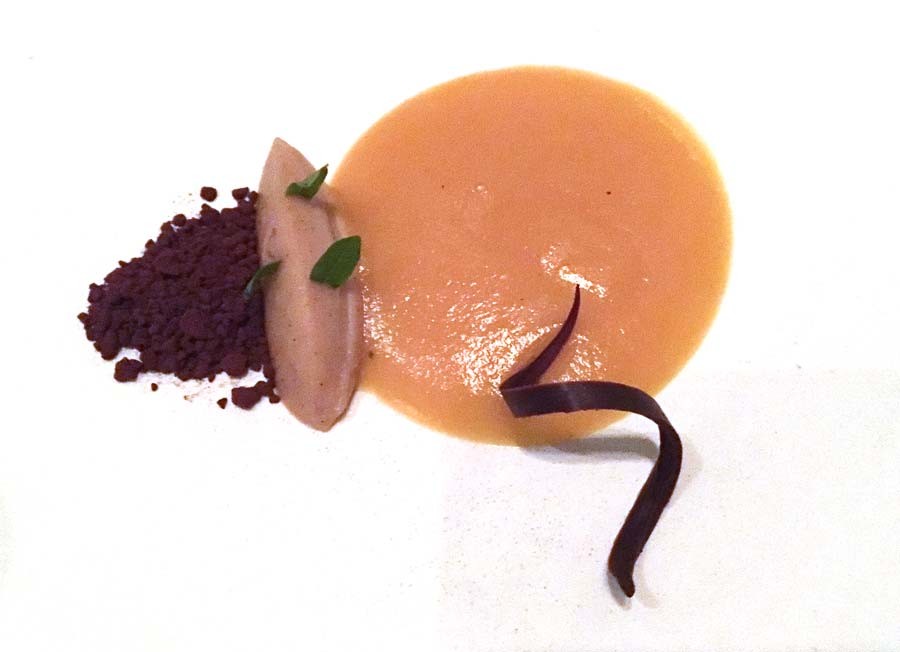 A small blob of Cachaca and lime ‘amuse bouche’ was followed by a Brazilian chili sorbet. As one of our party was doing the honorable thing and getting married the next month, we got stuck into a bottle of local bubbly, an excellent Cave Geisse Extra Brut 2014, from Pinto Bandeira.

The food then came. A breaded Oyster with Sago/mango, coconut and seaweed/Farofa and botarga/Herat of palm brandade with anchovy from Cantabrico/Pirarucu skin and banana puree was quite mind-blowing. A glass of Fuoripista 2016 from the Trentino washed it all down. What an Act 1, what can follow I ask? I could seriously have this dish again over and over. Genius! Then came the Sea bass and acai e yam. A glass of Itata Semillon 2016 (Chile) could not have been better either. A Scampi and coconut dish arrived with a glass of Sol Tardano 2017 from Bodega Gratias in Manchuela (Spain) and then came the Manioc beiju/Brazilian native manioc bread, baked and caramelized garlic, curd with mantiquerira mountain olive oil, cheese bread and Brazil nuts, onion and coffee. Alua! (a local herb drink).

Thank goodness a glass of wine was next up. This time from Vigneto San Vito in Emilia-Romania, their Posca Bianca NV was a wonderful choice. Pirarucu with acai and ‘pimento de cheiro’ (aromatic chilli). I thought the red wine was a Chilean Pais, but it was infact a Bairrada called Post Quercs 2015 from Filipa Pato. No pauses here, or civi breaks please, only onwards and upwards (or sideways), who cares. A Shrimp and manioc was served with Tara Chardonnay from the Atacama (the Chilean side) desert.

I hope you don’t mind if I go on like this. We are half way through the evening and I am definitely going back one day for more. See you there? maybe. Also, a lot of the local words for the food and sauces I have no idea what they mean, but if you have a good dictionary, and maybe also a map, good luck in the looking up.

Then came an Artichoke, Milk mayonnaise with cumara (Brazilian seed) and honey with a large glass of Artichoke water with Cynar on the side. Not one for the weaklings, but a terrific digestivo. If you think the first half of the menu is weird, then check this lot out.

Next was Quail with chocolate from Combu Island (the chocolate that is). One of my favorite Chilean reds was poured, Huaso de Sauzal ‘Chilena’ 2015 from the Maule Valley. Exqiusite! By the way, I have not told you this bit yet, but I had asked as we sat down at our table that all the wines were to be poured blind, and we did not want to read the menu either until later or afterwards. The waiters of course explained (in Portuguese) each course as it was served at the table. Surprises, surprises and just more surprises. Cupim was plated up and served. It’s a Brazilian beef cut accompanied with baroa potato and tofe. Of all the courses that we had enjoyed so far this was the most filling, and almost unnecessarily so, in the line of things. Especially, as 2/3rds of the diners, our table that is, were Argies and beef is something, as you are aware of, is rather close to our hearts and tummies. Anyway, they poured a super Brazilian red to go with the beef, Icone Teroldego 2012 from camino das Pedras in the south. Then we were treated to an Aligot. A what!? Well, I was expecting something like this during the evening as our dear Chef friend back in Buenos Aires, Martin at Roux, once explained to me that when he worked at DOM, this was one of their specialities. He told me that it is not a dish of potatoes with cheese, but it is infact a dish made of cheese with a little potato. Chef talk! Originally it is a dish that comes from L’Àubrac in France, and is a dish made from cheese blended into mashed potatoes (often with some garlic but not here in DOM) . The chef/waiter brings it hot to the table in a spiral of two spoons rolling away infront of him, until he can place it on the plate infront of the diner. Absolutly delicious, I would like to do this one at home one day, after a bit of practice obviously.

Now sweetie time arrives, and it lands gently with a Curd mousse, cashew and wine syrup. A glass of something that tasted like a really good cider was the accompaniment. And my god, so it was and all the way from dear old Brittany. (Mademoiselle Florence Loisel is the Cidermeister here). The most extraordinary dish then followed. It was a plate of Amazonic ant. In this case there were two of the wee beasties on my plate. Loved both of them, if not a little mind over matter was needed, they crunched away and it was indeed exquisite. Almost nursery food then followed as a healing tonic, with a helping of Brown sugar ‘kochi’ and mate herb ice-cream. Another Brazilian, and local, vinous surprise went down well in the form of a Niagara Soleira, Bellaquinta (Sao Roque, Sao Paolo).

It is now 2.30am and we are still having great fun. A charcoal grilled mango with Amazonic seed (puxuri) cream came with a lovely, lovely glass of Madeira in the style of Justino’s Seco, from can you believe this, Justino’s. I just did not want any of this to end, but I had an important meeting at 11am in the morning, so off we glugged into the night`s warmth of Sao Paolo, and just made it back to the hotel with not too much trouble. It was only 10 blocks away and my goodness I needed to stretch my legs. We all did for goodness sake. Six hours, 17 dishes later, and we could say 17 glasses of wine, I think maybe more to be honest with you, and thank god I am in the wine business as I did not feel a thing. I cannot recommend , I was about to say I cannot remember a thing, enough of any of the above wines and dishes. The Geisse Brut NV that we kicked off with, I will track some down somehow and ship it back home. So if you want to buy a bottle or two to try, please drop me a line. It will cost around 25 pounds a bottle + VAT. and is worth every Brexit pound you still have in your deep pocket.

Next up my dears, if you enjoyed all that little insight into the life of an ageing gastronaught who can still be well suprised, there is another little bugga bloggy coming up in December just in time for the end of the most unusual year, and in a good sense, that I have ever had.

At the beginning of the year, Argentine wine received great news: a Malbec from Paraje Altamira, Valle de Uco, obtained the perfect score from The Wine… read more